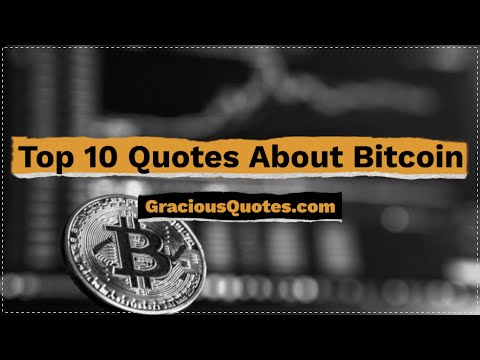 “When I first heard about Bitcoin, I thought it was impossible. How can you have a purely digital currency? Can’t I just copy your hard drive and have your bitcoins? I didn’t understand how that could be done, and then I looked into it and it was brilliant.”

15 Wise Quotes About Bitcoin and Cryptocurrency

Bitcoin is the first digital currency (aka cryptocurrency) and is a form of electronic cash. It was created in January 2009 by a mysterious Japanese man named Satoshi Nakamoto.

There is no such thing as a physical bitcoin though. The crypto is kept in a public ledger in the cloud verified by a massive amount of computing power.

This currency is not issued or backed by any banks or governments. This is true to all other blockchain currencies such as Litecoin in 2011, Monero in 2014 and Ethereum in 2015.

Cryptocurrency is extremely popular because generally, it promises lower transaction fees, unlike government-issued fiat currencies that may be vulnerable to hyperinflation.

Despite its conveniency and value, Bitcoin is extremely controversial. People have love-hate relationship for it.

Over the years, Bitcoin has garnered a bad reputation. Many drug lords and criminal organizations are known to have used Bitcoin to fund their operations and that’s why people are against it. But I’m not here to speculate.

The truth is, Bitcoin and cryptocurrencies have created numerous anonymous transactions never known to us before. It had changed the way several large corporations do business online.

To find out more about Bitcoin, also read these articles:

61 Investment Quotes to Inspire You (FINANCING)