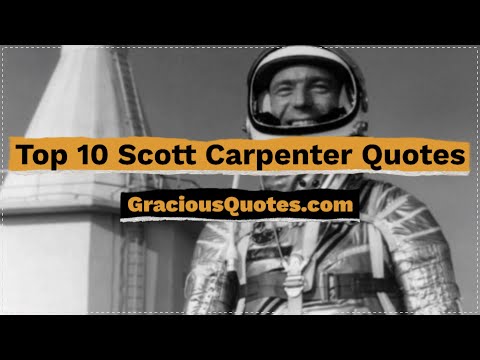 “It was a cherished experience. I feel I got the chance to see the inner workings of the grand order of things. In the overall scheme of things, it proves that men can do about anything they want to if they work hard enough at it, and I knew that I could do it… and that leads, of course, to a strong suspicion that everybody else can do it if they want to.”

Born on 1 May 1925 in Boulder, Colorado, U.S., Malcolm Scott Carpenter was one of the seven NASA astronauts (aka Mercury Seven) who was selected for Project Mercury during the height of the Cold War in 1958.

Malcolm Scott Carpenter was known for being one of the first Americans to orbit the Earth, second to John Glenn whom he became a backup pilot for, and the fourth American to be in space.

His first orbit of the Earth lasted 3 times in the span of four hours and 54 minutes before he was found on an orange life craft 290 nautical miles from his supposed landing site.

This event was marred by a lot of technical difficulties and some even openly criticized Carpenter’s performance which may have lead to the disaster that occurred. Carpenter believed that pioneering in space was something worth giving his life for.

He had faith in the unending human curiosity and thought that it was inevitable that humans will get to Mars one day. He was considered a pioneer to both the inner and outer space for he became an aquanaut in the Navy’s Man in the Sea Project after he retired from NASA after being there for two decades.

Scott Carpenter was as passionate about exploring the underwater world as he was exploring space. His colleagues regard him in good light and remember him not only for his intelligence and courage but especially for his great sense of humor.

Here are the best Scott Carpenter quotes so you can be inspired to take the uncommon journey of exploring the unknown.