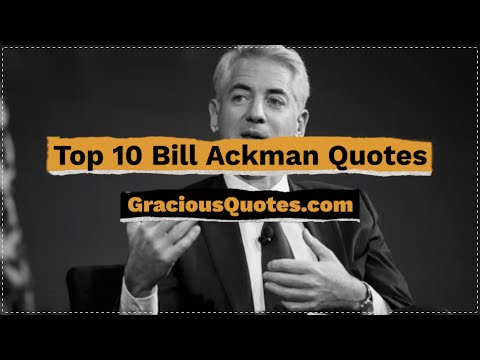 22 Highly Inspirational Bill Ackman Quotes to Empower and Motivate You

“From day one, I was always unafraid to ask someone to invest because, I thought that, while capital was a commodity, good investment ideas were rare assets.”

“I think most investors overdiversify because they’re lazy. They haven’t done enough research into any of their companies. If they’ve got 200 positions, do you think they know what’s going on at any one of those companies at this moment?”

“It is a certainty that Herbalife is a pyramid scheme. We believe it’s harming a population of low-income, principally Hispanic people in the U.S. to benefit a handful of super-wealthy people at the top of the pyramid.”

Born on 11 May 1966 in New York, the U.S., William Albert Ackman (goes by the name Bill Ackman) is an American investor and hedge fund manager who founded the Pershing Square Capital Management back in 2003.

Bill Ackman rose to fame for his short of bond insurer MBIA and his rescue of mall operator General Growth. Lately, Ackman is also known for his heated exchange between Carl Icahn over Herbalife on CNBC (aka Clash of Titans).

Ackman is notoriously known for shorting Herbalife, calling the company fraud, and making a big bet predicting that the company would fall sooner than later.

Turned out, Bill Ackman had made an expensive wrong bet for shorting Herbalife. As a result, Carl Icahn made over $1 billion on Herbalife while Bill Ackman had lost close to that amount over the span of 5 years.

Speculation calls the man a contrarian investor but Ackman considers himself an activist investor.

Here are the best Bill Ackman quotes so you can defend your position with thought leadership and have a wise exit-plan in place when predicting downward trends.